Raleigh, NC — This week, Senator Burr released a new TV ad on Deborah Ross’ admission that she would’ve voted for Obamacare and would be a “Rubber Stamp” for Hillary Clinton to expand the law. He was also profiled by “Capital Tonight,” and had a busy week on the campaign trail, which was capped off by a GOTV rally with Senators Tim Scott and Thom Tillis in Charlotte.

Ross’ week was wracked by a disturbing video released from one of her NYC fundraisers. After one of her donors was caught on camera making racially charged statements and comparing Republicans to Nazis, she was forced to get rid of the money he gave her.

Senator Burr Is Profiled In Capital Tonight’s “At Home” Series

“Approximately 40 to 50 people attended the September fundraising event organized by donors to the Ross campaign. One of those who attended was Benjamin Barber, a retired professor and political speaker who has donated to a number of Democratic campaigns and causes. Since 2008, Federal Election Commission records show him donating $12,825 in amounts of $1,000 or less. That does not include the $200 he contributed to attend the Ross fundraiser.

“In video posted by Project Veritas, a person wearing a hidden camera has engaged Barber in conversation. Project Veritas does not provide the whole conversation, but Barber does make comments comparing African-Americans who back Republican candidates to Jews who aided Nazis in the concentration camps, using the term sonderkommandos.

“‘So, blacks who are helping the other side are seriously (messed up) in the head. They’re only helping the enemy who will destroy them. Maybe they think, ‘If I help them, we’ll get along OK. Somehow, I’ll save my race by working with the murderers,’’ Barber said during the fundraiser, whose direct quote uses a vulgarity rather than the words ‘messed up.’

U.S. Sen. Richard Burr is being challenged by Democrat Deborah Ross, with polls showing the two in a close race.

Republican Sen. Thom Tillis, who was elected in 2014, told a crowd of about 40 people that’s important for the Republican Party to keep control of Congress.

Burr told the group that he has spent the last two weeks traveling the state, which he said has given him a chance to “take the pulse” of North Carolina.

“We sensed a real change a week ago,” he said. “The response for Republicans is unbelievable statewide.”

S.C. Republican Senator Tim Scott, who also spoke, told the crowd that “no on knows foreign policy better” than Burr.

In a tight race for reelection, Senator Richard Burr makes his rounds to thank volunteers and rally support.

“Thank each and every one of you for what you’ve done,” Burr told a crowded room at the Mecklenburg County GOP office.

Volunteers there have been working the phones to help win Burr a third term.

Burr got extra support from his colleagues, Junior Senator Thom Tillis and SC Senator Tim Scott, who is also up for reelection.

“We’ve been blessed with a lot of volunteers, a lot of folks on the phone for our campaign at home, so we wanted to take the time to cross over the border and bring the Carolinas back together again, so to speak,” said Sen. Scott. 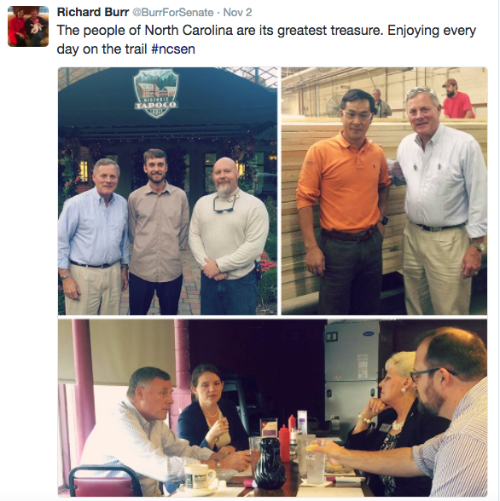 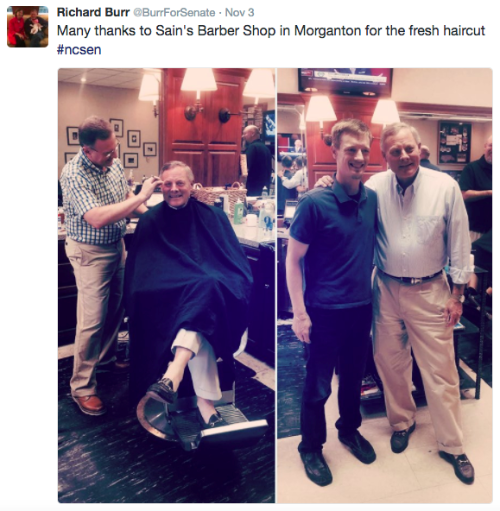 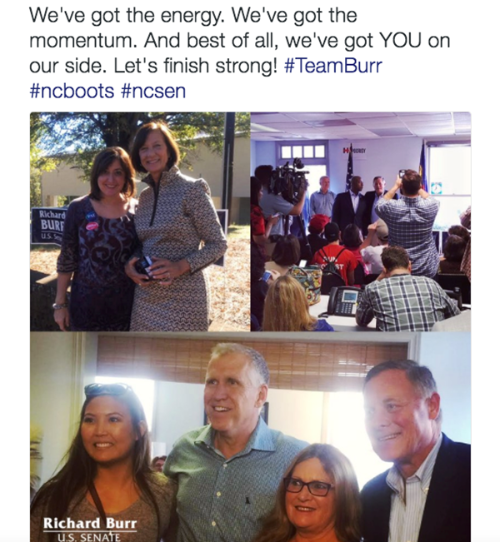