Raleigh, NC — It was truly a tale of two weeks in the North Carolina Senate race and it wasn’t a good one for Deborah Ross. Senator Burr’s week was highlighted by an endorsement from The Daily Reflector and campaign stops across the state. Buzzfeed also took an in-depth look at the grueling schedule Senator Burr maintains as the Chairman of the Senate Intelligence Committee and the vital role he plays in keeping our country safe. Senator Burr also released a new TV ad titled “Truth,” which shines a spotlight on the historic preservation tax credits Deborah Ross championed in the General Assembly and later took advantage of to avoid paying state and federal taxes.

Ross didn’t have the type of week you’d want two weeks out from Election Day. After admitting that she would have voted for Obamacare in the recent debate, the White House announced that health care premiums would “skyrocket” more than 40 percent in North Carolina and a story this morning by the Associated Press details how the limited insurer options are causing premiums to spike even more in rural North Carolina counties. Ross also refused to answer questions about her dangerous record at the ACLU. When asked whether she still believes that American intelligence agencies are “dangerous” and were made “all the more dangerous” by the PATRIOT Act, Ross refused to give an answer. She also refuses to say whether she still believes Hillary Clinton is trustworthy in light of the FBI furthering their investigation into the Clinton email scandal.

New Burr TV Ad –“Truth” – Takes Aim At The Historic Tax Credits Deborah Ross Championed In The General Assembly And Later Used For Her Own Benefit To Avoid Paying Federal And State Taxes.

Ross has said she supports Obamacare. Burr would vote to repeal the Affordable Care Act and replace it with his “Patient CARE Act,” giving tax credits to those who do not have health insurance through their employers. He supports health insurance coverage across state lines.

Every morning that he’s in Washington, long before most of his colleagues make their way to the Hill, Richard Burr treks to his Senate office for an intelligence briefing. As the day wears on, he’ll spend around six hours on briefings, reports and intelligence issues, and when he’s not in the Beltway, he’s arranging secure phone calls from remote sites.

“I don’t try to [talk about intelligence],” he told BuzzFeed News at a defense industry conference in Wilmington Thursday. “125,000 active duty troops — they get it. They understand the importance of that in our national security framework.”

Burr’s Intelligence Committee record would show otherwise. Since taking over chairmanship in 2014 of the Intelligence Committee, one of Washington’s most powerful oversight panels, Burr has attended nearly every one of its meetings — and the committee, which gathers at minimum twice a week, has one of the most rigorous schedules in Congress. When meetings aren’t happening, you can often find him down the hall from the Intelligence Committee’s top-secret hearing room in its secure office spaces, getting additional briefings or meeting with agency directors. CIA Director John Brennan is a frequent guest.

U.S. News: Premiums To Skyrocket For Some Obamacare Customers

Responding to the hikes, Republican National Committee Chairman Reince Priebus called the law a “full-fledged train wreck which has worsened our health care system” and urged voters to “hold Democrats in Congress who passed this destructive law accountable” by electing Republicans in various races.

A dozen battleground states are facing premium hikes and fewer insurance options on the exchanges. Plans in Pennsylvania will rise by an average of 53 percent and Illinois and North Carolina’s will go up by more than 40 percent.

Republicans including U.S. Sen. Richard Burr and Gov. Pat McCrory have pointed to the increased costs and reduced options as supporting their views that the plan should be scrapped.

A key finding: consumers will have the least amount of choice that they’ve had in the four years that the insurance marketplace has existed.

North Carolina is one of eight states that have only one participating insurer in the majority of their counties.

But in Cumberland, Harnett, Hoke and five other nearby, mostly rural counties to their south, the cost for that same policy would rise by 83 percent to $856 a month — the highest price for that coverage in the state.

McClatchy: “The Surprising Ways In Which NC Senate Candidates Agree On National Security”

“The new federal law will unleash the intelligence agencies which are all the more dangerous given the new technological tools at the government’s disposal,” her memo says.

Ross’ campaign this week refused to explain the 2001 memo. When asked about the criticism, Ross said in a statement: “Attacks like these are exactly what is wrong with politics. Of course, there is nothing more important to me than keeping the American people safe.”

Morning Consult: “Burr Calls On Ross To Say If She Still Backs Clinton In Light Of New FBI Probe”

Vulnerable Sen. Richard Burr, chairman of the Senate Intelligence Committee, moved swiftly Friday to tie his Democratic opponent to the newest development in the saga regarding Hillary Clinton’s use of a private email server while serving as secretary of State.

The North Carolina Republican called on former state lawmaker Deborah Ross to weigh in on the Federal Bureau of Investigation’s probing of newly discovered emails related to the server investigation.

“Ross must be asked to weigh in on the new controversy and state clearly whether she still stands by Clinton even as she is under investigation for the mishandling of classified information,” the North Carolina Republican’s campaign said in a release.

The previous day, as Burr’s campaign noted, Ross appeared with Clinton at a rally in North Carolina.

Burr, a 60-year-old, two-term senator from Winston-Salem, swung through Elizabeth City on Tuesday as he runs against Democratic challenger Deborah Ross. It’s an expensive, hard-fought race in a key battleground state, but after winning re-election twice, Burr said he’s used to that. Then and now, he explained, he’s just riding around North Carolina trying to have real, unscripted interactions with voters.

During the roughly 45-minute interview, Burr talked about jobs, infrastructure, health care, Ross’ attacks on his record, and Donald Trump.

North Carolina’s senior senator praised first responders in the wake of Hurricane Matthew, which caused severe flooding in roughly a third of the state’s 100 counties Oct. 8-9. Wilson County saw more than a foot of rain in some areas and is included in a federal disaster declaration.

“I think the thing we walked away with a full understanding of is regardless of the state or the federal response, the community response exemplified what’s great about America,” Burr said. “The things that we saw were miraculous. You wouldn’t see them maybe anywhere else in the rest of the world, but you saw them in North Carolina. The community response was ‘If you come, we’ll take your help, but if you don’t come, we’re going to take care of it ourselves.’

Locked in a tight race to keep his seat, Burr appeared relaxed as he took some time to sample a Pepsi from the Pepsi Store and walked around downtown meeting with people before he spoke to the Craven County Republican Women on Wednesday.

Burr began his visit at the Baker’s Kitchen at 10 a.m., arriving from Kinston. After meeting owner Sabrina Bengel, he visited among the tables, shaking hands and chatting with diners.

The conversation was light rather than political. One woman, smiling as he looked at her infant child, asked if he did any babysitting. “All the time,” he replied.

Burr, who received the Friend of Farm Bureau award during the event, praised the farmers for their hard work.

During his brief remarks, the Republican senator also commented on:

Hurricane Matthew tore through the Southeast in early October, leaving 28 dead in North Carolina and land ravaged. Burr said the swift response from local communities strengthened his pride in America. 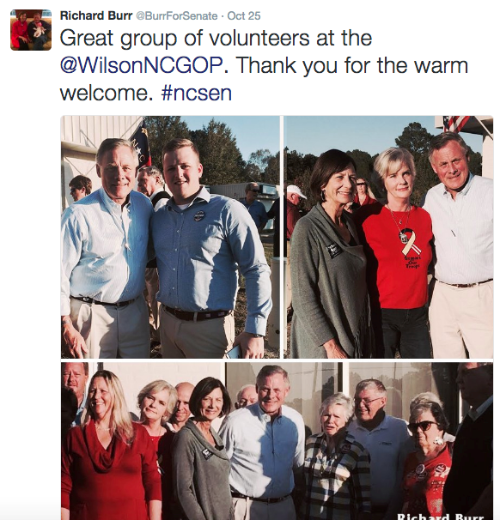 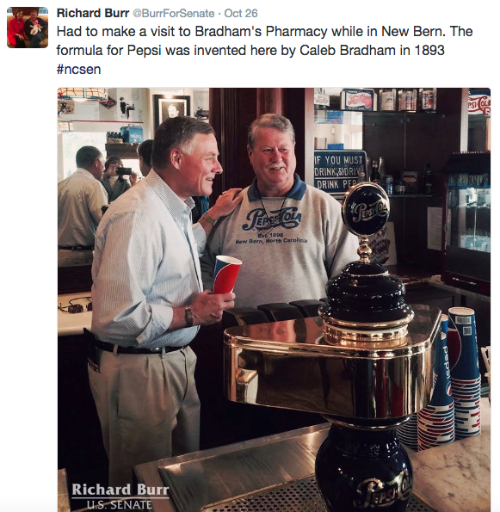 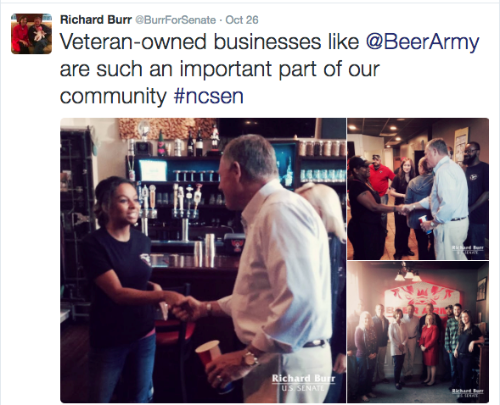 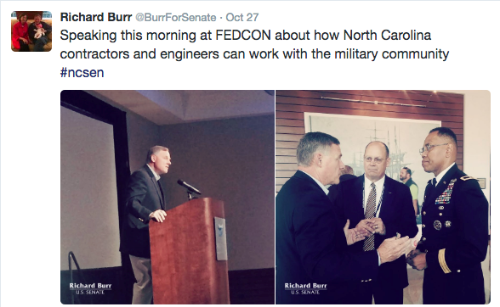 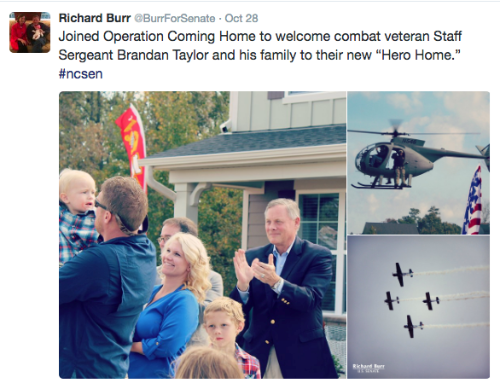