Not The Headline Deborah Ross Wanted On Debate Day

Raleigh, NC — According to a front-page story in today’s

News & Observer, Deborah Ross frequently touts the votes she took in support of historical preservation tax credits during her career in the legislature. But what Ross doesn’t tell voters is that she has personally benefited from those same tax credits she worked to protect. Here are a few highlights from the story: 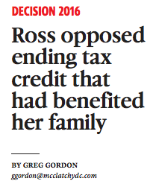 There’s also an op-ed running in today’s Fayetteville Observer penned by State Rep. John Szoka that highlights how unprepared Deborah Ross is when it comes to national security.

“United States senators play a vital role in matters of national security and keeping our country safe. As chairman of the Senate Intelligence Committee, no one understands the threats facing our nation better than Sen. Richard Burr.

“Senator Burr’s national security record stands in stark contrast to that of his opponent, Deborah Ross. Ross, the former top lobbyist and executive director of the N.C. American Civil Liberties Union, is not only unprepared for these important discussions, but she is dangerously out of touch when she is forced to weigh in.