Raleigh, NC —This week saw a clear contrast between Senator Burr and Deborah Ross on the important issue of safety for all North Carolinians. While Ross was under fire yet again for fighting against the creation of the North Carolina Sex Offender Registry during her time with the ACLU, Senator Burr received the endorsement of the North Carolina Troopers Association and the campaign released its “Public Safety Officials for Burr” leadership team. Ross’ dangerous actions at the ACLU raise questions about whose interests she’d truly represent.

The week started out rough for Deborah Ross as The News & Observer ran a front page story in their Sunday edition that highlighted Ross’ radical ACLU career. The story looked at the 1995 memo Ross penned that detailed her opposition to the sex offender registry and they also covered other eyebrow raising decisions Ross made as the ACLU’s top lobbyist.

Highlights From The Story:

“In a memo Ross wrote to ACLU members, she said the registry ‘would make it even harder for people to reintegrate into society and start over and could lead to vigilantism.’ She also argued that the registry might harm victims who were abused by family members because the victims’ names could become public by association. T’he unintended consequence is that people are going to be very surprised at who’s on the list,’ Ross said in a 1997 News & Observer article. ‘It’s not Jeffrey Dahmer. It’s going to be a family member, a cousin or an uncle.’ But Ross said it’s wrong to claim she opposed the registry. ‘I’ve always been in favor of a sex offender registry,’ she said. ‘When I became a legislator, I voted 18 times to strengthen the sex offender registry.’ She says she wanted lawmakers to consider potential consequences of the registry. ‘Nobody really knew what was going to happen with what was going to go out over the internet,’ she said.’”

·      “Within months, Ross was in court trying to prevent a 13-year-old boy facing rape charges from being tried as an adult. She continued to work on juvenile justice issues, joining Gov. Jim Hunt and then-state Sen. Roy Cooper – now the attorney general running for governor – in developing an overhaul of the state’s system for dealing with young offenders. The bill aimed to treat juveniles according to the seriousness of their crimes, the risks they pose and their personal histories, while funding more detention centers, training schools and prevention efforts. Ross applauded the initiative but continued to criticize the state’s practice of treating 16- and 17-year-old offenders as adults.”

On Monday, Senator Burr authored an op-ed in the North State Journal about the failures of Obamacare.

“Obamacare is imploding. With each passing day, we see more evidence that the program that promised Americans affordable health care is on the verge of total collapse.

“The failures of Obamacare are well documented in the media. Insurance premiums are skyrocketing for both families and employers, insurers are withdrawing from the exchanges, and consumers are seeing their health care options rapidly disappear. Under Obamacare, families are paying much more and getting way less.”

The Burr campaign’s latest statewide TV ad, “Kelly,” was released on Tuesday and it directly addressed how Deborah Ross opposed the creation of the North Carolina Sex Offender Registry. In the ad, retired Marine Corps Sergeant Kelly Lowe expresses her feelings about how she, as a rape survivor, feels about Ross’ actions.

Wednesday saw Ross on the defensive over the new TV ad and Democrats were openly acknowledging how toxic Ross’ actions are with voters.

The Washington Post: Could The U.S. Senate Race In North Carolina Come Down To This Attack Ad?

·      “A heartless liberal fighting to protect sex offenders’ rights over victims? That’s damning stuff for voters to hear in one of Democrats’ most promising pickup opportunities, and Democrats know it.”

·      “Republicans counter that if you have to explain why you have troubles with a sex offender registry, then you’re already losing the debate. They point to news articles from the ’90s where she expressed concern about ‘vigilantism.’”

·      “Democrats don’t argue Burr’s ad could be bad news for their candidate. They shared with The Fix internal polling that shows Ross takes a significant double-digit hit after voters see Burr’s ad about the sex offender registry.”

On Thursday, Senator Burr received the endorsement of the North Carolina Troopers Association. President Daniel Jenkins praised Senator Burr’s commitment to public safety and cited the need for his strong leadership as a primary reason for their endorsement.

On Friday, Senator Burr attended the North Carolina Nurses Association’s annual convention and spoke about the future of the healthcare system. 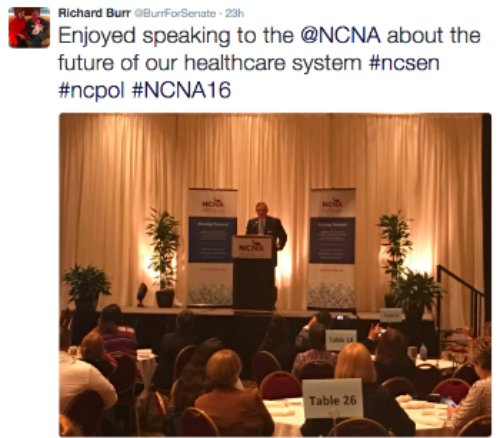 The Burr campaign also released its “Public Safety Officials for Burr” leadership team, the sixth leadership team in support of Senator Burr’s candidacy. The leadership team is made up of nearly a dozen sheriffs, district attorneys, fire chiefs and state troopers. Forsyth County District Attorney Jim O’Neill had this to say about Senator Burr:

“The safety and security of North Carolinians is paramount to Senator Burr, and he’s displayed a strong commitment to ensuring public safety officials have the tools they need to do their jobs effectively. We are faced with different dangers everyday, and Senator Burr’s leadership in the Senate is critical to helping us improve the safety of our communities.” – Jim O’Neill, Co-Chair of “Public Safety Officials for Burr” leadership team

On Saturday, Senator Burr attended the 5th Annual Buddy Walk in Jacksonville in support of Down Syndrome Awareness Month. 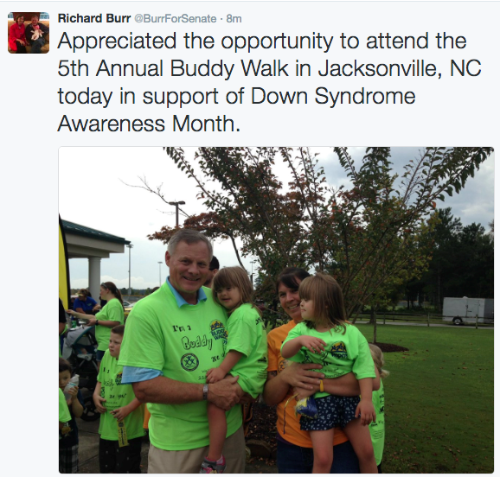